Is your ice melter safe around your pets?

Is your ice melter safe around your pets?
- why are pet retailers chosing GroundWorks Natural Icemelter? 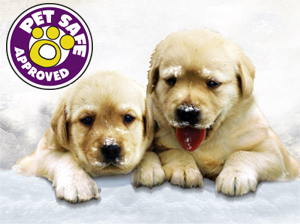 Most pet owners are very concerned about their pets and treat them like “one of the family”, except when it come to the icemelter they use. Your pet does care what type of icemelter you use, as they have no choice but to walk upon it after it has been applied.


The two main issues to be concerned about with respect to the choice of icemelter used around pets is, will the icemelter affect their paws, eyes, nose and what if your pets licks their paws after they have walked upon the icemelter. Many pet owners do not realize that some deicers can be quite harmful to their pets.

Potassium chloride is a plant nutrient and common agricultural fertilizer

used by farmers worldwide that helps grow bigger, stronger plants with improved disease resistance, increased resistance to stress from drought. In fact, using potassium chloride near plants, crops and landscaping can help to repair some of the damage caused by the over-application of sodium products over the years.

as an effective water softener to eliminate the calcium and magnesium in groundwater that cause soap scum and lime scale, and as such it is often present in our drinking water. People with cardiovascular disorders and those who want to avoid sodium, use potassium chloride as a salt substitute. And though it’s not considered as tasty as its less-healthy counterpart, it’s a food additive in many things we eat, including cheese, margarine, ice-cream, breakfast cereals, sweeteners, soups and broths, beer, and many processed/freeze-dried, and canned foods.

Because potassium is a mineral required for healthy physiology, it’s also an ingredient found in many over-the-counter and prescription medicines. Potassium chloride is so safe that it’s a common alternative to traditional salt licks often put out for livestock including deer and horses. Popular pet food brands like Beneful®, Hill’s Science Diet®, Nutro® Natural Choice, Pedigree®, Purina®, Iams®, Eukanuba®, and Kibbles ‘n Bits® all include potassium chloride as an ingredient in a variety of their specialty foods. Safe for crops, safe for plants, safe for soil, safe for concrete, safe for water, safe to eat . . . no wonder retailers are choosing GroundWorks™.