The Case Against Magnesium Chloride

Ice melters and Concrete
- the basics, what everyone should know.

Winter brings the most picturesque scenes: families playing in the snow, friends around the fireplace and ski trips, but it also brings a rise in weather related problems. Of these, ice and its removal are among the most critical. Unfortunately, there are a small percentage of those who crack their ice dilemma only to face another problem when spring arrives; damaged concrete. There is much confusion surrounding this damage which is mostly caused by the freeze/thaw cycle. Too often people attribute concrete damage to the ice melter that was used. It is the purpose of this bulletin to help you better understand: the types of damage that happens to concrete, what causes them, and how to repair and prevent further damage.

According to the American Concrete Institute (ACI), which is a leading United States concrete authority that sets many of the guidelines and standards that are used today in the designing, planning, construction and inspection of concrete structures, there are several chemicals, some of which are used in ice melter formulas that actually attack concrete, and are best avoided. They are:

By far the most risk of damage to your concrete during the winter months is attributed to the freeze/thaw cycle. To put this in sample terms, it is the build up of water [melted ice] being absorbed into the porous concrete, which then freezes and expands. This expansion within the concrete causes pressure to build up and eventually this build up will exceed the limit that the concrete was built to withstand. When the pressure becomes too much for the concrete to withstand, scaling generally occurs.


As mentioned earlier, the freeze/thaw cycle is a natural process and there is no way of eliminating it. However to reduce the damage caused by this cycle, we strongly recommend that after applying the ice melter and when the ice turns into slush, that the slush be removed from the concrete pavement, sidewalk or driveway to reduce the amount of water that may penetrate the concrete thus reducing the pressure build up. 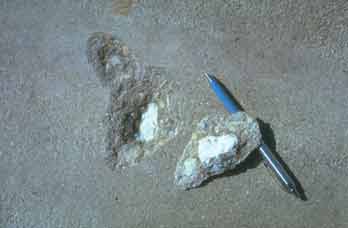 Another type of damage that can be attributed to the freeze/thaw cycle is a popout. Popouts occur due to internal swelling in the concrete causing small fragments of concrete to break away from the surface. Poputs are usually caused by highly absorbent rocks that are not capable of holding a lot of pressure. When freezing occurs under moist conditions, the rock will swell up and when there is sufficient internal pressure, the rock will break from concrete surface.

Many things can be done to prevent or reduce the risk of this damage occurring. For example, concrete that is properly air-entrained - that is, concrete containing enough small air pockets – will better resist scaling and mortar flaking caused by the freeze/thaw cycle, since these air pockets help to cushion the pressure caused by freezing of the absorbed water. Another example, is to ensure your concrete is of the highest quality and standard. To this end, there are several important points that one should know:

Okay, so if one has experienced freeze/thaw cycle damage, what is one to do?


According to the Portland Cement Association (PCA), another leading concrete authority, that to protect against further freeze/thaw damage a breathable surface treatment may be applied on the concrete. Impermeable materials such as epoxies should not be used because moisture can be trapped in the concrete which could lead to further damage.

Oil treatment such as linseed oil, silane, siloxane, or other materials are recommended. Linseed oil treatment consists of two applicants. Combining equal parts of commercially boiled linseed oil with a solvent such as turpentine or mineral spirits, the recommended coverage for the first application is roughly 40 to 50 sq. yd per gallon [9-11m/liter]. The second application should roughly be 70 sq yd gallon [15m/litre]. To make sure that the oil treatment is successful, the temperature of the concrete at the time of application should be 50°F (10°C) or above. This allows for sufficient drying to take place.

There are several ways to minimize or eliminate popouts:


To repair poputs, one can fill in the patch left behind with a dry-pack mortar, epoxy mortar, or other appropriate patch material. For a surface that has numerous popouts, a thin-bonded concrete overlay may be used to cover up the cosmetic detraction.

It is not recommend that ice melter be used on damaged concrete. Damaged concrete will absorb the water [melted ice] more readily since its ‘seal’ has been broken and therefore can be more susceptible to damage. It is best to reseal or treat your damaged concrete as mentioned earlier, before using any ice melter on it. Further, it is recommended that for concrete less than 12 months old that NO ice melter be used. Newly poured concrete needs time to cure and settle. The application of ice melter on concrete less that 12 months old may weaken the concrete structure making it more susceptible to damage in the future. In order to reduce slipping, falling and liability risks, we suggest applying sand or gravel on the new concrete slab to give it some traction.

As important as it is for one to know the makeup of their concrete, they should also understand how various icemelting products will affect their concrete and its immediate environment. Sodium chloride for example, will attack the metal rebar contained within the concrete when it is soaked up into the concrete and also damages surrounding vegetation, soil structure and ground water. Calcium chloride, which tends to leave an oily residue on your concrete surface, will actually discolor concrete. It does this by accelerating the hydration process, while having a retarding effect on hydration of the ferrite compound in Portland Cement. Magnesium chloride, ammonium nitrate and ammonium sulfate attack and disintegrate concrete and should be strictly avoided.


On the other hand, urea will not chemically damage concrete, however it contains nitrogen, which breaks down to ammonia and is quite toxic to aquatic life. A great choice to consider for your concrete, is a fertilizer based ice melter, such as XYNYTH Manufacturing’s Mountain Organic Natural ice melter ä, which is potassium based. It actually reduces the change of damage to surfaces by preventing refreezing of the melted ice longer than other ice melters and by leaving no residue behind. It is also good for the vegetation and safe on the eco-systems.


This bulletin provides a general guideline on the causes of concrete damage and ways to repair and prevent them. For more detailed information, please consult your local icemelt distributor, the American Concrete Institute (ACI), the Portland Cement Association (PCA).